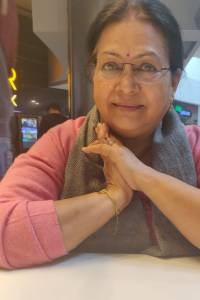 The stage was being set very swiftly. It was another matter that the preparations may have taken years, decades or in some cases even ages, all depending on the incubation and cunningness of the beasts and the groundwork and preparedness of the fighters. They had been expecting these female demons for some time now. They could spawn hundreds of their own kind in a matter of minutes and scatter them into space. These offsprings became adults almost immediately and in turn, could produce their own spawns. This way they were used to terrifying the other beings in space. All this had stopped when Maa Durga and then Bhagwan Ram had annihilated them. These were space creatures and brilliantly cunning. When their ilk was being demolished by Bhagwan Ram and his formidable army, they flew high into space much above the Earth’s solar system, changed their forms and hid and became dormant. They fixed their internal clocks for waking up at different times according to their age and powers. On one hand, Aishani was raring to go with her newly released powers; on the other hand, there was Adheesh with his sober analytic brain, assessing the situation from all angles. And then there was Guruji in deep meditation almost in a trance in front of them. By now Aishani and Adheesh knew that this meeting was about a legion of evil creatures that had come out of their hibernation and were now roaming in space creating chaos and havoc. Both of them had ideas of their own. Aishani was thinking that if only they had a cloaking device with which they could become invisible and destroy these demons. But sadly the invisible cloak that she had was not very strong, to begin with, and she could not fly with it. It was just something which her father had given her to play around with. Adheesh also knew that even if the cloaking device was strong enough to fool the demons, they would still have to have divine weapons to demolish the demons, all of which seemed impossible as of now. They kept on mulling over these problems and waited for Guruji to give them instructions. Eventually, Guruji opened his eyes and smiled at them. They touched his feet respectfully. Guruji smiled and blessed them.